Walsh changes it up at Ferrum 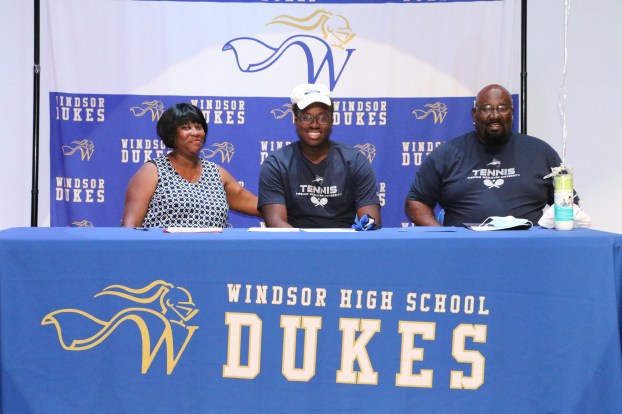 Windsor High School boys tennis and basketball standout A.J. Allmond, center, who graduated June 11, celebrates after having signed to attend and play tennis for Virginia Wesleyan University. He is joined in this photo from his June 16 signing ceremony by his parents, Sandy and Art Allmond.

A.J. Allmond has been accumulating confidence over the years to emerge as a student-athlete that commands the interest of college programs, like the Virginia Wesleyan University men’s tennis team.

With family, friends and coaches on hand June 16 at Windsor High School, Allmond, who graduated from the school June 11, signed to attend and play tennis for Virginia Wesleyan.

“It feels great,” he said. “It feels amazing to get this opportunity to play tennis at a higher level.”

He said this has been his goal since he was 6 or 7 years old.

“I would just watch TV — (Rafael) Nadal, (Roger) Federer — and watch them and be like, ‘I want to be like them and play at a higher level,’” he said.

Now 17, Allmond has been playing tennis for about 10 years, gaining experience as a United States Tennis Association Junior athlete and as a student-athlete with Isle of Wight County Schools, including two years of varsity playing experience at Windsor, minus his junior season, which was canceled due to the COVID-19 pandemic.

In his sophomore and senior seasons representing the varsity Dukes, Allmond went 26-1 as a singles player, including 21-0 in the Tri-Rivers District.

In singles play as a senior, he won the district championship and was a standout in the region.

“We’re in Group 2, Region A,” Windsor Athletic Director Chuck Parrish said during the signing ceremony. “We’re in a competitive region with tennis, and A.J. finished region runner-up in singles, and then he was a part of our doubles team — him and Seth Janus finished second in the region on our doubles team. So A.J. did a great job in leading our tennis team and also our basketball team.”

Allmond had multiple college tennis programs interested in him, including Virginia State University, but he said scholarships and a positive campus visit led him to go to Virginia Wesleyan.

“The campus is great,” he said. “The people that I met there from the visit seemed cool, seemed polite, so I felt that that would be a good fit for me.”

For reaching his present level of achievement, Allmond said, “First of all I want to thank God, because I wouldn’t be here if it weren’t for Him. I want to thank my family, especially my dad. He’s been coaching me from a little kid to here and now. That’s who I want to thank — my coaches, my teammates, my peers.”

His father, Art Allmond, was excited to see his son sign, knowing so well how much went into making it happen.

“It’s good to see the hard work that he’s done,” Art Allmond said. “He’s the one that put the work in.”

A.J.’s mother, Sandy Allmond, said she was happy for her son because tennis is one of his primary passions.

In a speech A.J. gave during the ceremony, he echoed some of his previous expressions of gratitude while sharing how he has grown.

“As a young boy, I wasn’t the fastest or the strongest person on the court,” he said. “I was also the last one picked. But over the years, I gained confidence from my teachers, coaches, principals and peers, and I thank you all. I also want to especially thank my parents, who gave me an extra push I needed from time to time, and my granddad.”

He said his late grandfather believed in him from the time he was a little boy.

A.J. also noted he will always be a Windsor Duke in his heart.

Art Allmond thanked the Windsor Dukes for supporting his son through the years and for getting the tennis program back together after 2020.

Parrish spoke highly of A.J. during a brief speech of his own.

“I’ve had the privilege to know A.J. since he was in eighth grade,” he said. “He’s played basketball for us, he’s played tennis for us, he’s a great young man, works hard at tennis, worked hard at basketball, always has a smile on his face. I’ve always enjoyed working with A.J. I had the privilege to coach him a little bit in basketball, and I enjoyed watching him play tennis. This year, he was one of three seniors on our team.”

A.J. said the Virginia Wesleyan Marlins have a lot of seniors on their team, but he shared his approach to climbing the ranks of the team.

“I feel like I can get in the top six if I work my way up,” he said. “It just comes with hard work and dedication.”

He said he plans to major in sports management, looking to go into the coaching field. 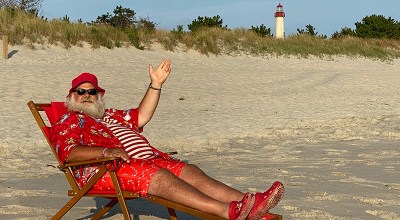